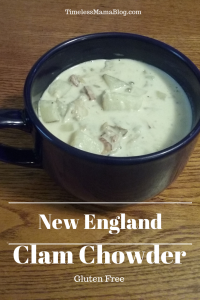 One of my all time favorite soups is New England Clam Chowder.
Store-bought versions contain a lot of additives we try to avoid (plus, they are not gluten free, so my son cannot have them), so making it is the best option.

I am a huge fan of soups. Unfortunately, hubby is not, so when I do make soup, it is usually for lunch or when he is out of town.

In a large pot, brown bacon until nearly crisp.

Add onions and celery and cook until tender and somewhat translucent.

Add remaining ingredients and bring just to a boil.

Reduce heat and simmer until the potatoes are soft, but not too soft (15-20 minutes), stirring frequently. Let cool a bit before serving.

I like to leave the potato skins on for the added nutrition.

The following are affiliate links to products that I love. If you make a purchase through one of my links I receive a small commission.